My Why… I am a 200hr yoga teacher. This decision to become a yoga teacher was based on a few reasons. Of course one of these was, is and always will be my love for yoga, but my very main reason for deciding to become a teacher…. To help others to be at their best and happiest and receive all the many amazing benefits I found through my yoga practices.

I began a yoga practice in the evenings after work nearly 6 years ago, this was the first I had experienced yoga and I thoroughly loved it instantly. I had no fitness level, I had never been to any sport or fitness class or even a gym until then. I walked my dog and that's about it. Starting this yoga class made me feel so relaxed after work when I usually would still be stressing about the day gone by and over thinking everything that had or had not happened in work. I began to feel focused during the class although Savansana was the tough pose for me, I still found it very very hard to switch off my mind which is in a constant circus. Even when my mind didn't relax fully which it never did back then, it still relaxed me and made my body relax, I loved coming home after class having a new outlook and feeling. Even when it left again the minute I went into work the next day! 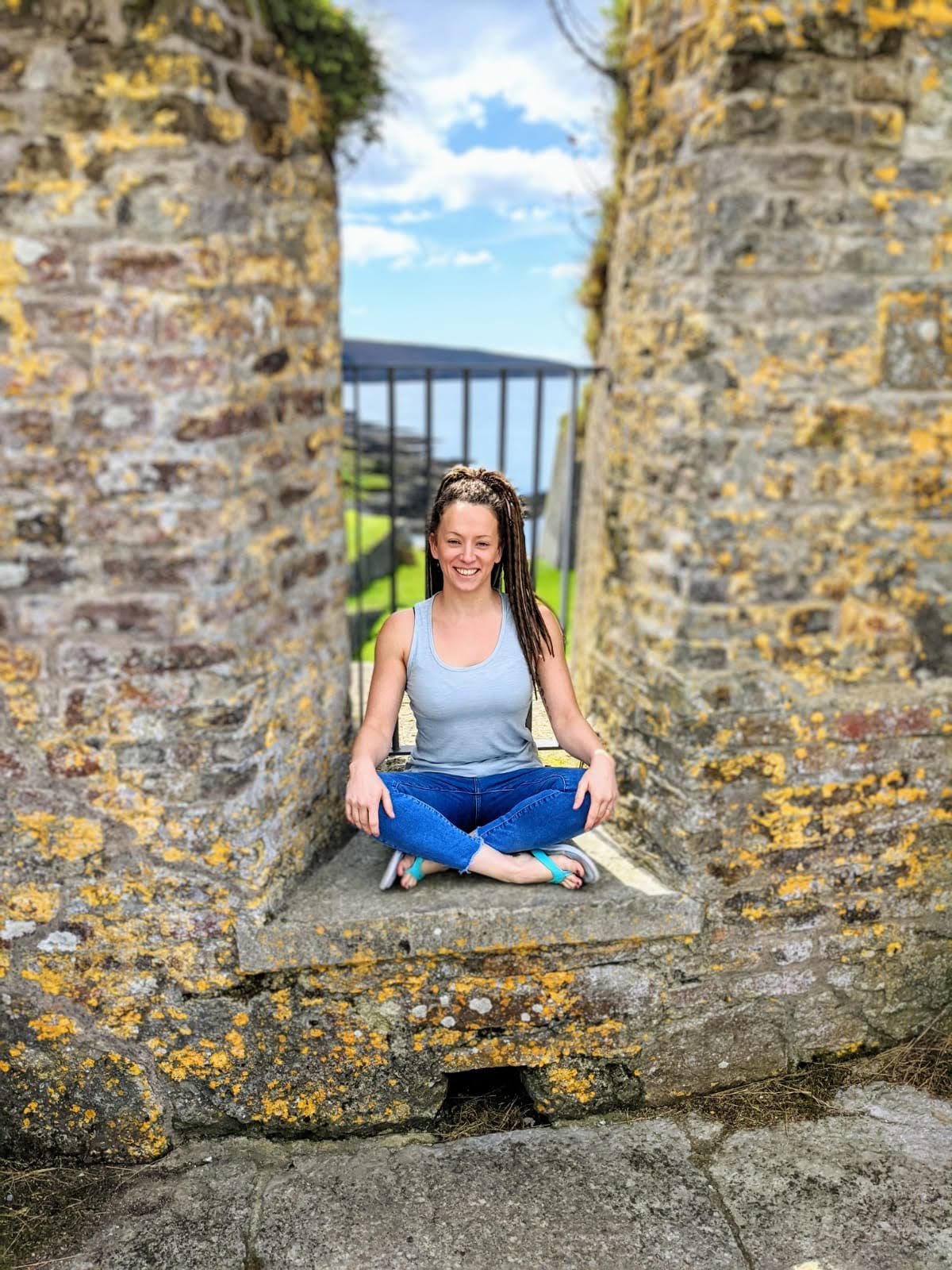 Through these yoga classes I found a physical awareness, I liked the classes, they were not that easy and I was challenging myself, and I look at yoga as a physical exercise and also a switch off from the outside world. I loved that I would have a fantastic nights sleep after each yoga class and I really looked forward to this sleep each week.

After about a year my yoga practice fell away from class and I ended up just practicing from the TV or the yoga DVD my teacher had made. This was due to my working hours changing. To be honest even my home practice got less and less and fell to the side but it had got me off the couch and I had begun to go to a gym and had even started running with my dog and going on a lot more walks, so I guess this is where it had helped my entire life only I didn't know it at this stage. My mindset had started to change and I was more conscious of my mind and body. I would have always thought more so that the change was to be physical and this is why I had started doing other physical activities but I guess looking back yoga had actually begun to change my mindset more than I knew as I had started to regard myself as something more than before. I had begun to eat a bit better, drink a little less and I started to treat my body and mind with a bit more value. (Although I did not realize that back then). I did think about yoga alot when I wasn't doing it and gradually would find my teachers DVD around and suddenly pick it up and do a class and even though it was the same class as before, it was so much harder when I had been away from it for so long but each time I watched it, I remembered how much I wanted and needed to get to a class.

I went back to a yoga class again after about 2 years and it all came flooding back to me I loved yoga and I wanted to do so much more of it. I remember thinking after the first class “ouch I cannot believe my body can have worked so much in a yoga class and is sore, even though I go to the gym so much” (I know this as it was my Facebook status). This block of classes finished after a few months and I again had no class to go to and this is when I needed it the most, when I was working out and my body was stiff and sore and just gaining muscle and beginning to seize up but I could not find another class and then again another year went by.

I began to take up a sport, rugby and my gosh I admit I got so many injurys constantly and this is not because rugby is a rough sport but because my body had been only used to the gym and not being stretched, it was so so tight in all areas and I began to pull my hamstrings regularly, groin strained or pulled, Achilles issues, calf problems, shin splints….. Honestly the list goes on and on, this didn't stop me playing as I loved the sport but I never put this all together, all I needed was yoga!!! As a sports person I began to just work through the injuries, going to physio and constantly stretching out with the exercises given to me (but only when I got injured after that I would go back to no stretching). Obviously I had a great warm up and cool down with the team but for some body's that's not enough and for my body it wasn't, I need something off the pitch that would help my body from injury prevention.

In my second year of rugby I continued to get pulls and strains, but alas the yoga DVD fell to my hand at just the right time. I decided to begin a home practice again and began to find an improvement through the DVD and again from the television and it was working but I knew from the help and instructions my yoga teacher has always given to me, I needed supervision and I needed a class. Then I finally found a class that worked with me time wise and by the end of year 2 my injuries were beginning to lessen month to month. I knew then not only was yoga helping me mentally to focus and be on top of my game with mental focus, it was also helping my body physically. This was so noticeable even to my physio who began to see less of me. My only frustration was that classes were very hard to come by, If I could not make it on a certain night then I could not have a class that week, as all classes were either booked up fully or no classes were available.

At this stage in my life things had changed massively from where I began personally and again they were beginning to change now down a route of wellness and I had began to look at holistic approachs to my overall health and wellness. I went for a few Reiki sessions and I loved and felt the benefits of Reiki and I just knew this was something for me. In the following few months I ended up getting attuned to Reiki 1. This began a whole new chapter of my life and I began thinking so much more on energy and thinking and looking outside the box for everything in life. I loved this new me and I even brought my sister on the journey with me as we do say we are both airy fairies so she also then got attuned to Reiki and we both began an amazing journey together in learning and understanding a whole new energy and life.

One day I remember my Reiki Master saying you should go to yoga and I thought “I do when I can get a class, I love it”. She gave me the name of her teacher and again I tried to get in with her and so grateful I was to get a spot in her class and this lasted for a few months and then training for rugby season started and it clashed with the only night of the yoga so again I could not make it.

Eventually I decided I love yoga and it's benefiting me and I am not able to get to a class and that means others cannot make a class, I know as my sister was also trying to get into a class and was on 3 waiting lists. So I decided I have to get yoga out to others, helping others to receive the many benefits I have received. I knew then of a few people looking for classes and could not find them and I just thought that wasn't good enough, yoga to me changed my entire life from physical to mental to just being a better person to myself and others. Without knowing and getting deep into the history of yoga it had changed my life completely and my outlook on everything and everyone. So I had to do something and I also called upon my sister and she decided to take up this course with me…we ended up training together to become yoga teachers and it was an amazing and wonderful journey to be on with my sister.

I will be honest and say wow was I taken back by the meditation and breath part and the history and all the theory of becoming a yoga teacher, it was tough and exhausting and something I did not think I would get through. I knew I was physically tough enough and I could do the tough classes but every time meditation or relaxation was mentioned, I would literally freeze up!! That part was not so much me I was just all about the practice….. Little did I know I was missing the best part!! As always in life everything happens for a reason and I suffered a bad knee injury in a game during my teacher training year which of course meant I could not do all the physical work. Thankfully that happened, as I then had to focus on the theory. This to me was such an eye opener because without this injury I may have never passed my training, I was so focused on the physical practice that I had ended up having a lot of work to do on the theory, the history, the relaxation the meditations the breath practice… the scary parts turned out to be the best parts and I needed more than than others on these parts.

I remember the first time meditation was mentioned and all in the class and I remember my sister saying she loved it and she could meditate for at least an hour maybe two…. My whole body shook, I couldn't do one minute as I say my mind is like a circus and the physical practice was the only thing that could quieten it!! So as I say everything happens for a reason and this injury gave me the time to truly begin to understand yoga as a whole and not just as a physical practice and I began to piece it all together like a jigsaw and began to understand why and how yoga had done so much for me without even knowing it I was doing more than just a physical practice when I went to class I just did not know it. Don't get me wrong, I'm still working on my meditation and trying to do more than 10 minutes a day… So I have not reached the one hour level yet but hey that's why we are all different and we leave our ego at the door, don't compare because we will be let down, only think and see your progress instead :)